By 2009 a number of improvements were identified and the HRC 900 was re-introduced as the HRC 990. A major improvement was the introduction of the flip top lid with a heavy duty O-ring to prevent water ingress. 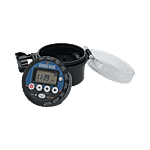 What are your Feelings